Hungary is a country still recovering from decades under the communist regime. Many of the effects of that regime are still evident today. One of those effects is the mentality of most (not all), of Hungary's anglers. There are very few anglers in Hungary fishing for sport, catch and release is almost non-existent. Everything caught (apart from undersize fish), goes into the pot for eating, that includes wels cats of all sizes but the very smallest. To most UK cat anglers to whom fish care and conservation is paramount, this may seem like sacrilege. However, there are two main factors that have shaped this mentality. Firstly, during decades of communist rule where living standards were low and food in the shops sometimes scarce, fishing for the pot was a necessary supplement to the diet in order to survive ! Secondly, being a landlocked country, freshwater fish are its only 'natural' source of fish. UK anglers visiting Hungary would do well to be aware of the Hungarian mentality, to understand the main reasons for it, and accept it for what it is. Although the standard of living has certainly risen since the communist days and there is no shortage of food anymore which means that fishing for the pot is not the necessity it once was. However, generation after generation having grown up with that mentality, it isn't going to change overnight.

Hungary's two largest rivers are The Danube and The Tisza. Although the Tisza is a tributary of the Danube, prior to year 2000 it was the Tisza that held most of the attention from cat anglers. That is until a double disaster struck, the first at the end of January 2000 when a reservoir containing waste water with a very high concentration of cyanide, used by a gold mining company in Romania, burst a dam wall, spilling an estimated one hundred thousand cubic metres of waste into the Tisza. As if that wasn't enough, a little over a month later, another reservoir in Romania overspilled, this time from a company dealing in heavy metals, the main content of that overspill was copper which is extremely toxic to fish and most other water life. The result of these overspills was disastrous for the Tisza, everything was totally wiped out. An estimated 3000 tons of fish died as well as all insect and microlife, even the bacteria. All plant life was also wiped out. Thousands of birds that use the river died, otters, foxes, sheep and cattle also died.

River Tisza
Before the tragic events of year 2000, the Tisza was one of the finest cat fishing rivers in Eastern Europe with a large population of cats up to the 200 lb mark and possibly beyond. Scientists estimated that it may take 20 years for the river to recover, at the time of writing it has been 15 years and the river has not yet recovered its former glory. The Hungarian authorities have undertaken stocking procedures, there are now good quantities of silver fish which are easy to catch for bait. Cats though are rather scarce still but steadily increasing in both size and quantity. The river is well lined with trees and bushes in most places but bank fishing access can be found at various places. An excellent starting point is the 'floating accommodation' at Tiszababolna, (although it isn't actually floating!) It is fitted out for anglers, not 5 star but presentable. Boats can be hired quite cheaply and bank access can be found from the boat. There is a tackle shop on site from which fishing permits can be obtained. In 2011 a 24 hour permit cost 1800Ft (approx £4.50), plus 1000Ft (approx £2.50) for a national licence which is valid for a year. Tiszababolna is about 60 Km south of the City of Miscolc. There is also good bank access at Szolnok, approx 115 Km south east of Budapest. No boat needed, there is good car access to swims. Permits from tackle shop in the town. The area around Lake Tisza is also worth exploring, the river runs into one end of the lake and out the other end. It is a popular tourist spot though so be warned. The lake itself should be avoided for that reason but the river downstream of the lake looks interesting. 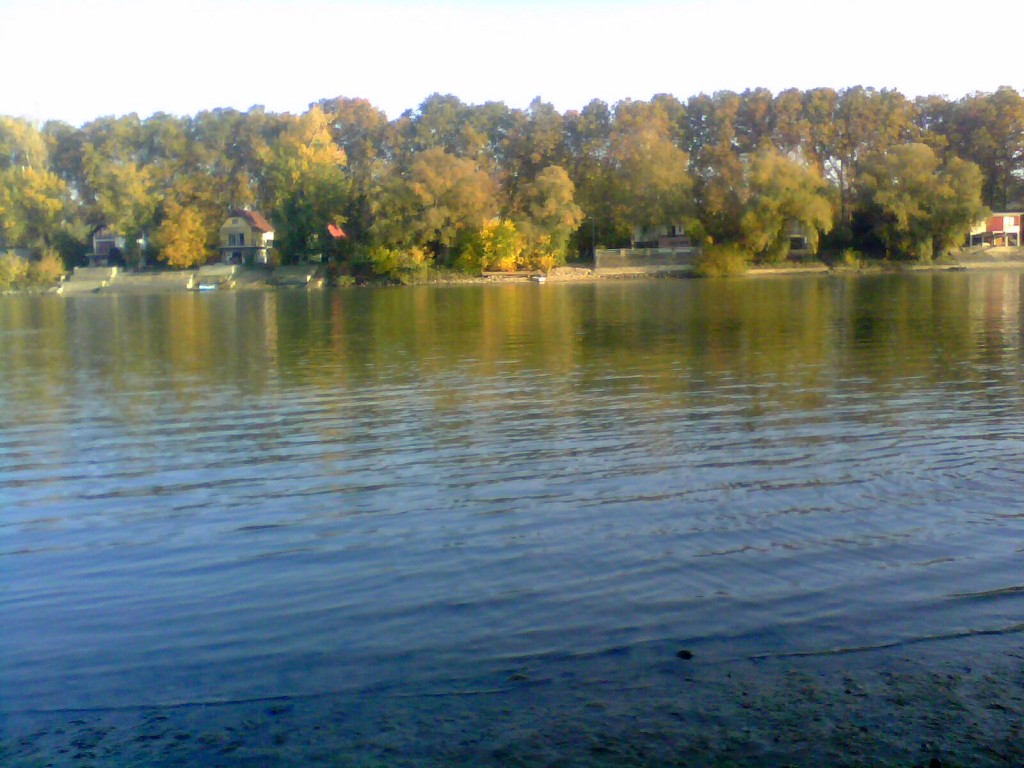 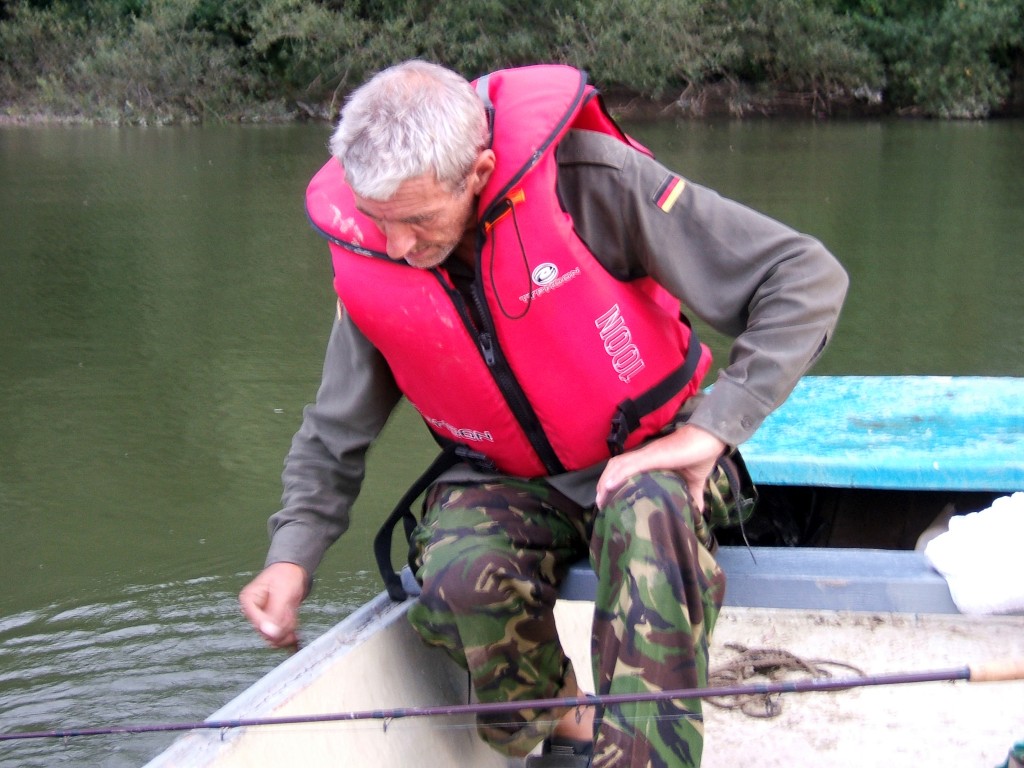 River Danube
The Danube is currently the best bet if river fishing is the requirement.
Bank access can be found at intervals both upstream and downstream of Budapest. The Danube flows right through the middle of Budapest but trying to fish that area is not recommended. In fact Budapest is probably best avoided altogether, it has all the inconvenience associated with capital cities, traffic congestion, almost impossible to park etc. In addition there is a certain amount of non toxic pollution from Budapest based industry so as far as downstream fishing goes, the further from Budapest the better to allow the pollution to dilute. 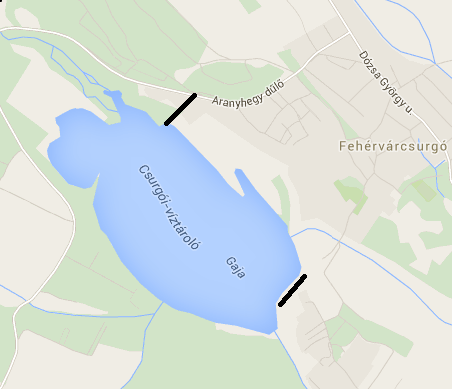 Situated in the village of Fehervarcsurgo, approx 80 Km south west of Budapest, this large reservoir's duty is to keep several canals topped up rather than to supply domestic residences. Well worth a visit as it holds a good head of cats to well over 100 lbs. They hold an annual two day catfish match there every spring and the quality and quantity of fish caught is usually very good. Looking at the map to the left, it can been seen that there the access by a track from the road is indicated by the heavy black line. There is a long area of fishable bank to the left of the track. Permits are not expensive and available from the petrol filling station situated close to the junction of road and track. The far end bank marked with black line is also accessible by taking the road around and cars can be parked close to the swim. Contrary to the norm, this venue is catch and release only. 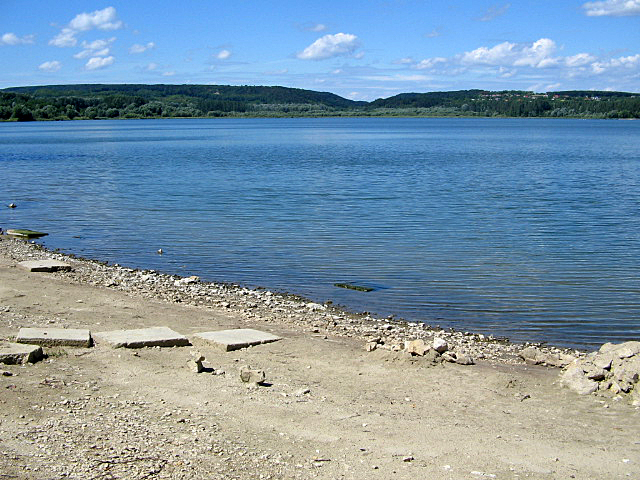 Lake Oreg
Situated in the town of Tata, approx 70 Km north west of Budapest, and often referred to as lake Tata. This is an excellent cat fishing venue, absolutely stuffed with cats of all sizes. On the downside, it's very expensive. There are numerous wooden chalets which they expect anglers to rent while fishing, hence the high cost. However, if money is no object and you want to be fairly sure of catching then this is the place. Permits available on site.

Patka Lake
This is a very nice venue, medium size private lake, picturesque, comfortable grass banks, helpful owner and very reasonable price. Permits available on site, very reasonable cost and no national licence needed for this one. The law in Hungary does not require national licences to be purchased to fish private waters. Situated in the village of Patka is approx 70 Km south west of Budapest. The stock level a few years ago was low regarding cats but the owner expressed his intention to stock more cats. It would therefore be wise to determine current stock level before fishing. Live baits are plentiful and very easy to catch. 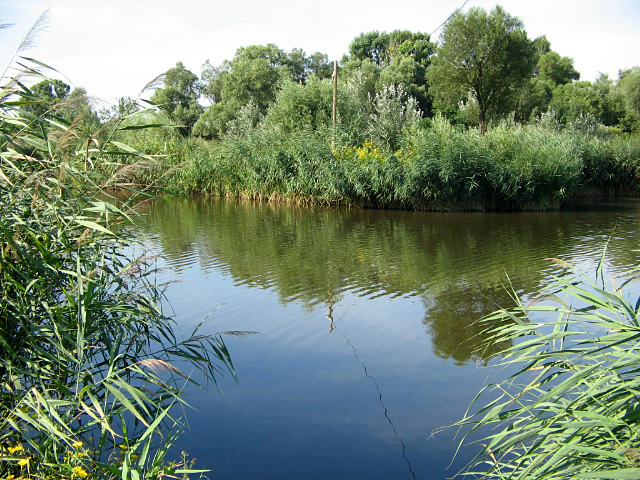 Lake Balaton
Approx 110 Km (to its nearest point) south west of Budapest, can be found Lake Balaton. At approx 50 miles long and 8 miles wide with a surface area of some 230 square miles, Lake Balaton is by far the largest lake in central Europe. A rift lake with rugged, rocky areas as well as sandy beaches. Large expanses of water are often awe inspiring but not necessarily very productive for the angler. Balaton is no exception. Location, as always, is the main problem, although the north shore is definitely the place to start, having deep water close to the shore. The southern shore being very shallow attracts swimmers, boaters and all the crew. The stock level of cats is also unclear and the fact that Balaton is Hungary's largest tourist attraction, makes it a very speculative venture. Permits available at any of the tackle shops in the many towns bordering the lake. They are expensive, taking advantage of the tourist trade, a huge percentage of which are German. 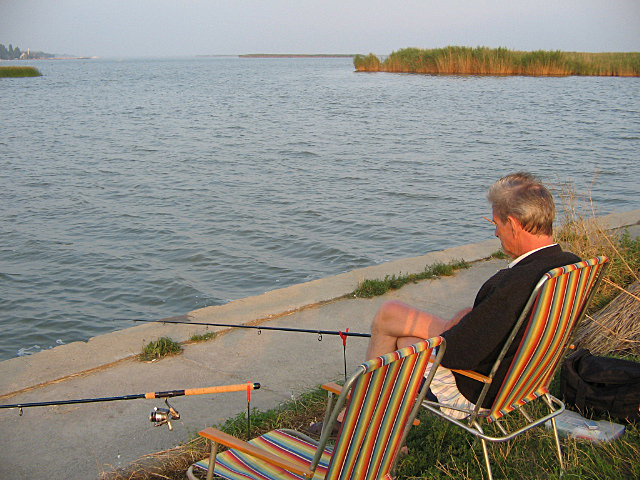 Situated between Budapest and Balaton, approx 50 Km south west of Budapest. The M7 runs along its length on the north side and route 7 along the south side. Velence is Hungary's second largest lake and also a significant tourist attraction. Depth is fairly constant at about 5 feet and since most of the tourist activity is concentrated on the south side, the north side would clearly be preferable for serious anglers. Permits however are expensive, again cashing in on the tourists. The two predominant species are bream and carp and since most of the fishing here is for the pot, not many fish survive long enough to grow big. Cats are scarce and once again location is a problem. The lake bed being fairly flat, the main features are the large reed beds scattered all over the lake. 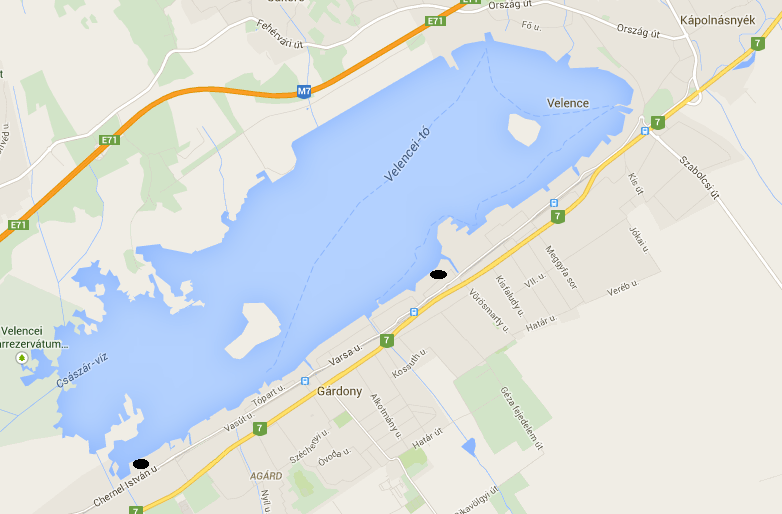 There are two tackle shops on the shore of the lake marked on the map with black ovals, one near the end of the lake in Agard from which permits are available, the other shop has a much better range of tackle and bait as well as boats for hire at a reasonable price.

Kapolnasnyek
The lake at Kapolnasnyek can be seen in the top right corner of the Velence map. To put the comparative size with Velence into perspective, remember that Lake Velence is huge !! Kapolnasnyek lake can be seen easily from the road (route 7) and permits are available on site. This is purely a 'fish for the pot' venue. The fishing permit is very cheap but any fish you catch have to be purchased at the going rate per kilo. It is worth mentioning here that there is a belief among many Hungarian anglers and fishery owners/managers that if you return predators such as wels cats, pike and zander, they will die. Kapolnasnyek lake is quite well stocked with cats according to the manager and can be readily caught in daytime. This lake was visited by long term CCG member Maurice Johnson who fancied spending a day there just for some sport and explained to the manager any cats caught would be returned. She promptly replied that it wasn't possible because the fish would die. after spending several minutes trying to convince her that fish only die if and when they are badly handled and promising that any fish I caught and returned would not die. However, she wasn't having it and he left without fishing.!

Mosquito Warning
Anybody planning to go to Hungary needs to take this warning very seriously. There are more mosquitoes in Hungary than you could possibly imagine, if you don't take adequate protection you will have problems and it's not only at night, in some places they are active twenty four hours. In addition to the normal mosquito repellents, nets are advisable while asleep, it really is that bad. Summer temperatures can and do reach 40 degrees centigrade which mosquitoes love and breed like crazy. Unfortunately those temperatures are not good for the well being of bats, which would help to keep the mosquitoes in check but there are no bats in Hungary.

Some useful words with pronunciation